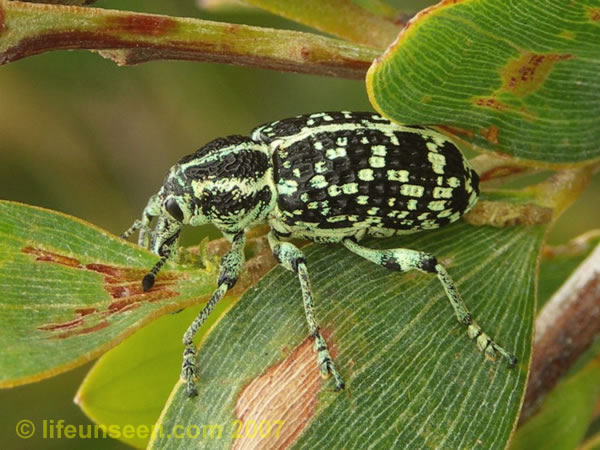 Species documented in 1775 by Fabricius.

Their long snout allows them to chew holes in plants to make egg chambers, and assists with food gathering (Aus. Museum, 2007). They are often said to be described as being iridescent green and black. Their undersides also display tones of green. The slightly punctated bodies have a white to green line running vertically their entire length.

Found throughout most of Australia, favouring eastern Australia.

The Adult weevil feeds on twigs of acacias, whilst the larvae feed on the roots. They are often considered as pests, as they are reported to cause ‘severe damage’ to acacia plantations in south eastern Australia. The adults can chop off new shoots, whilst the larvae can kill acacia saplings by feeding on the roots (A. J. Hunt et al, 1996).

The Australian Weevil was collected on Cook’s voyage in 1770 by Joseph Banks. It was the first scientifically described Australian insect (Australian Museum, 2004).

Australian Insects Website about the caterpillars of this species have alternate black and white bands, with orange bands on the mesothorax and on the ...
Read More
Species

Here you have some more Insects of Australia. These Caterpillars are grey and hairy with a brown head. They are famous for walking in ...
Read More

This is an Australian Insects Website, where you can find the most common Household Bugs in Australia and some useful tips how to get rid of them.

An ongoing work in progress. Although spiders are not insects, arachnids are also included in the database.

There are thought to be approximately 220,000 different species of insects in Australia. There are currently around 86,000 species identified in 661 families.

Worldwide, it is estimated that there are 30 million different species of insects, making up to almost 90% of all living things on the planet.

Australia has more than:

Due to the geographical location and the spectacular coastline, rainforests and extreme climate, Australia is home to the world’s most fascinating dangerous crawling creatures. Most of us would like to make insects disappear, but of course this is not possible. Bugs and insects have an essential role in the circle of life. They are a special group of animals, that have occupied almost every environment on the earth. Australian Insects website will help you with insect identification of Australian insects, and all types of weird Australian dangerous insects.

Many cultures in the world consume insects and bugs, so there are already so many edible insect companies and products that you don’t even know about them. Many people dislike the insects and they refuse consuming them, considering they are dirty, but the edible insects such as grasshoppers, lepidopteran and coleopteran larvae, mostly eat fresh plants, so they are more hygienic than crabs. The edible insects have health benefits and due to that, they have become very popular in the world. You want a meal full of protein, iron or B12? The crickets are exactly what are you looking for.  You should give them a try.

Australia is a country that has a reputation for being a home to some of the world’s most dangerous creatures, but when we are talking about insects, they are not that harmful for humans. Here you have a list of the 10 most dangerous Australian insects.
1. Funnel-web spiders – It is considered  as the most deadly.
2. Redback spiders – They are known as thieves, because they take food from other webs.
3. Paralysis Ticks – When attached to humans, they inject venom.
4. Honeybees – Some people may be allergic on these honey makers, and they are very special because they are the only species of bee to die after it attacks.
5. Mosquitoes – Mosquitoes are Australian flying insects and the female mosquitoes are those that drink our blood.
6. White-tailed Spider – There spiders are known as hunters and they mostly hunt other spiders.
7. European Wasp – They can become very aggressive, especially when their nest is disturbed.